You are here: Home1 / Tree Diseases 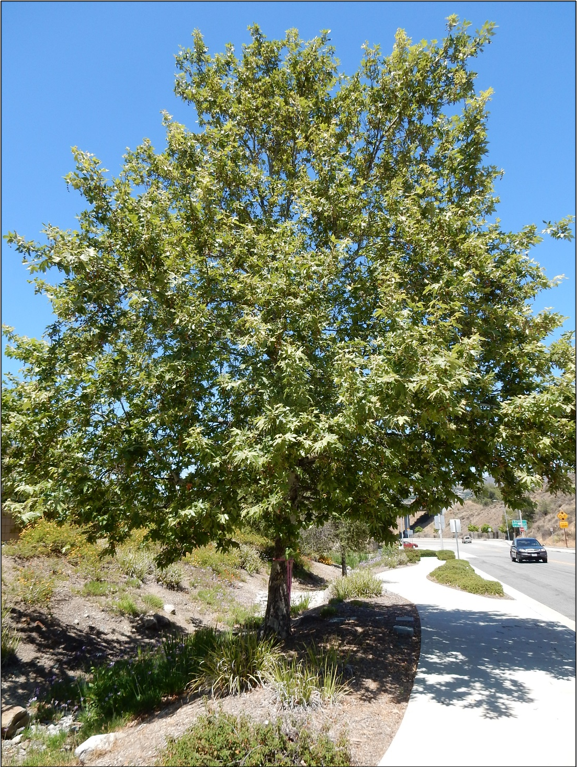 Many of the largest tree species native to California are conifers, but there are a few big broadleaf species that also call the Sunshine State home. The California sycamore (Platanus racemosa) is an excellent example, as it not only reaches heights in excess of 80 feet, but it has some of the largest leaves of any tree native to the U.S.

California sycamores grow wild along the southeastern coast of the state, but they’re often planted by homeowners, landscapers, and commercial property managers, so you can see them just about anywhere. It’s easy to understand their popularity: They often exhibit attractive fall color, and they have some of the most attractive tree bark around.

But unfortunately, despite all of these characteristics that make California sycamores so popular, they’re also susceptible to a few diseases. We’ll explain a few of the most noteworthy diseases that afflict these trees, so you can keep an eye out for the first signs of illness and get your trees the prompt care they need.

Sycamore anthracnose is one of the most common diseases that commonly affect California sycamore trees. It can be very difficult to treat, but it doesn’t typically kill mature, established trees.

A fungal disease, sycamore anthracnose typically affects the young shoots and leaves of a tree. You may see black or brown lesions appear on the surface of the leaves, some of the branches may become twisted or deformed, or you may notice your tree shedding leaves during the early summer. In some cases, you may see portions of the canopy defoliate completely.

Sycamore anthracnose is most commonly observed following wet springs. The ample moisture gives the fungus a chance to disperse, and the new leaves provide an easy and readily available food source for the fungus (mature leaves typically manage to fight off infection more effectively than young leaves do).

Sycamore canker stain is a fungal disease that affects sycamores and London plane trees in California. Another serious ailment, this disease often causes trees to die within about 24 months of the first visible symptoms.

Some of the most reliable signs of infection include small, yellow leaves throughout the canopy and the presence of depressed cankers on the trunk and primary branches. The wood of infected trees is often discolored, yet it doesn’t become soft or rot away as happens with some other canker diseases.

Unlike sycamore anthracnose and canker stain, which primarily affect sycamore trees, leaf spot disease is caused by more open-minded pathogens (fungi). The exact nature of the illness caused will vary based on which fungi is attacking a given tree, but most produce relatively similar symptoms: Numerous yellow to brown spots appearing on the leaves.

If you suspect that your sycamore tree is suffering from a disease or is simply not thriving the way you’d like it to, give your friends at Evergreen Arborist Consultants a call. We’ll have one of our ISA-certified arborists visit your property, inspect the tree in question, and then provide a recommended course of action.

Just be sure to do so promptly to give your trees the best possible chance at a recovery.

Thanks in part to the current popularity of avocados, many homeowners have begun growing their own avocado trees.

This is a great way to keep your kitchen stocked with the delicious and nutritious fruits, but the trees themselves are also quite desirable. They not only exhibit a handsome growth habit, but they also produce dense foliage, which can provide excellent shade. And because avocados grow well in Southern California, they’re likely to become even more common over time.

Unfortunately, while avocado trees can provide substantial value to the average suburban property, they are susceptible to a variety of diseases. This includes generalist pathogens that afflict a variety of species as well as more targeted threats, which tend to harm avocado trees more than others.

We’ll talk about five of the most common diseases of avocado trees below and describe some of the most obvious symptoms they cause. This should help you spot the first signs of trouble so that you can get your trees the help they need.

Armillaria root rot is a widespread disease that afflicts a number of tree species. In avocado trees, it generally manifests as reduced vigor and overall, generalized decline. The leaves of afflicted trees will usually look yellow, and many will fall off the tree prematurely.

Verticillium wilt is one of the easiest ailments to identify for avocado trees. Typically, the first obvious symptom involves the sudden wilting of foliage on one side of the tree. The leaves will quickly turn brown, but they won’t fall off the tree for some time. If any branches are removed from the tree, be sure to inspect them for gray-colored streaks, as this is another symptom that often suggests verticillium wilt.

Avocado black streak is a serious disease that often kills trees outright. In the early stages, the disease is often characterized by poor fruit production, blotchy markings on the leaves, and a general yellowing of the tree’s foliage. As the disease progresses, cankers often form on the trunk and branches, and new growth tends to die shortly after appearing.

Dothiorella canker is a relatively minor fungal problem that occasionally afflicts avocado trees. It usually begins with the formation of cankers on the trunk and primary branches. Over time, these cankers will eventually begin to discharge a white powder, and the bark on the trunk will begin to split and peel away from the tree. Over time, this disease often makes trees appear dead or nearly so but might recover with proper treatment.

Phytophthora canker is another serious disease that affects avocado trees. But while some trees die shortly after contracting the disease, others linger for months or years before succumbing. Phytophthora canker usually manifests as a series of lesions or cankers on the lower trunk. These dark-colored cankers often begin to leak a reddish sap-like fluid, which is often described as having a fruity odor. This disease often afflicts trees that are also infected with avocado root rot, which makes treatment particularly complex.

Fortunately, avocado trees are relatively hardy, and they can often survive pests and disease with proper treatment. Just remember to act quickly if you suspect that your avocado trees have contracted an infection – prompt action is the best way to give your trees the best chance of survival.

If you think that your avocado trees are suffering from one of the diseases discussed above (or they are failing to thrive for any reason), give your friends at Evergreen Arborist Consultants a call. One of our ISA-certified arborists will visit your property, inspect your trees and provide actionable advice for addressing the issue.

In many ways, fungi represent some of the most important and omnipresent threats to trees.

Many fungi subsist almost entirely on the tissues of trees, and thanks to their reproductive strategy, their spores can be found nearly everywhere. And unfortunately, scientists estimate that there are millions of fungal species in the world.

Below, we’ll explain the basics of one such species and discuss how it may affect your trees. The species is known to biologists and arborists as Trametes versicolor, but most people simply call it what it looks like: the turkey tail fungus.

Turkey tail fungus is named for its resemblance to a turkey’s tail – that’s plain to see when you look at it. In general appearance, it looks like a vaguely semicircular fan, with rings of varying colors (in fact, “versicolor” means “of several colors”). The fan-shaped fungus is only a millimeter or two thick, but it occasionally reaches 4-inches in diameter.

Note that when we describe the turkey tail fungus, we are really only discussing the fruiting body or mushroom – a structure that biologists call a sporocarp. The bulk of the organism grows as thin fibers called mycelia, which are found inside the tree or soil.

Turkey tail fungus does look somewhat similar to a few other species. The best way to distinguish it from its lookalikes relies on subtle characteristics, such as pore size. This is generally outside of the capabilities of amateurs, so while you can often arrive at a tentative identification of the fungus, you’ll likely need professional help to arrive at a positive identification.

It’s hard to know for sure, but many biologists believe that turkey tail may be the most common decomposer of hardwood trees in the United States. The species is, in fact, absurdly common, and you can probably find it during a brief walk through any hardwood forest.

Nevertheless, while it does occasionally attack conifers, turkey tail fungus is primarily a threat to hardwoods. A few of its most common targets include the following:

However, it is important to remember that turkey tail fungus can affect an incredibly broad subsection of trees, so you don’t want to rely on its host species to confirm or disconfirm its identity.

Turkey tail fungus is likely most commonly seen on dead trees, shed branches and old firewood, but it also attacks living individuals. It most commonly attacks wounded trees (or those that have been improperly pruned), but it is also a problem for trees that have become stressed by improper care, water stress or disease.

Sequalae: What Happens When Turkey Tail Fungus Infects a Tree

Turkey tail fungus – like many other fungi – digests and decomposes the structural elements of a tree’s cells. Turkey tail primarily attacks a component of the tree’s cell walls, called lignin.

Lignin is typically dark brown in color, which means that when the fungus destroys it, the infected wood often becomes very pale or white in color. This is part of the reason turkey tail is said to cause white rot (as opposed to brown rot, which is caused by other fungi).

If you suspect that some of your trees have become infected with turkey tail virus, give your friends at Evergreen Arborist Consultants a call and we’ll have one of our certified and experienced arborists visit your property.

Incidences of Sudden Oak Death in California are being monitored to combat the disease. Residents in Los Altos and Los Altos Hills recently gathered to learn how to treat and protect trees from the disease, where so far few trees have been infected. Researchers at UC Berkeley have predicted that the disease could eliminate 90% of California’s black oak and live oak trees with 25 years if steps aren’t taken to control it. A survey of the area’s trees conducted in May showed that nearly 10 times more trees were infected with the disease than the previous year, with the highest incidence in East Bay, Saratoga, and Sonoma. Los Altos and Los Altos Hills are thought to have a low disease incidence because of the landscaped nature of the area with less native vegetation.

Sudden Oak Death showed up in California less than 25 years ago when infected California bay laurels and other infected plants were introduced into the landscape. Laurels can have the disease without dying, but once an oak gets the disease, it will die. Oak trees can be treated with an annual injection or bark application of phosphite, which has minimal environmental impact and increases resistance to the disease.

Residents can help stop the spread of the disease by cleaning garden tools and vehicles of soil and debris from infection sites and buying ornamental plants from nurseries that test for the disease.