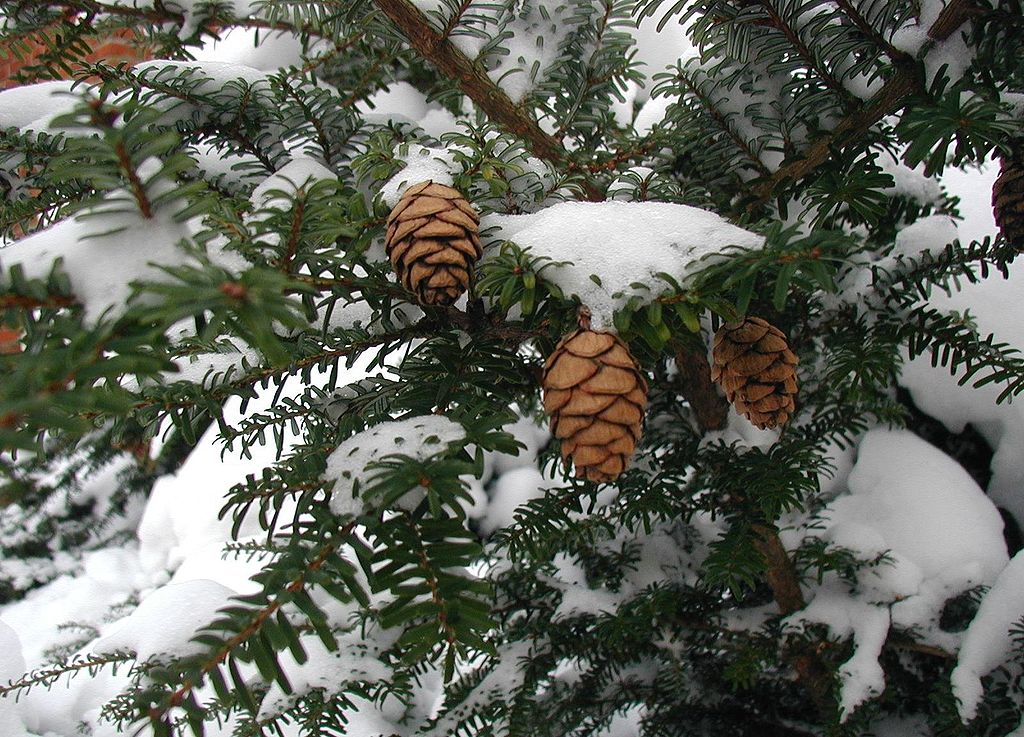 The eight or so described hemlock species (Tsuga spp.) are evergreen trees who reproduce through cones, like all other living conifers. However, because of their preferred habitats – cool, rainy areas — hemlocks exhibit a variety of traits and tendencies that are at odds with most other conifers.

Hemlocks produce branches that are often arranged as flat, drooping splays. The needle-like leaves attach singly to the branches. Some Tsuga species bear needles in a single plain, while others bear needles that point in virtually every direction. The brown bark of hemlocks is usually scaly or flaking, and often becomes deeply fissured on mature specimens. Hemlock pollen cones are brown and rather unremarkable; seed cones are rather small, but they are quite attractive.

Hemlocks are medium-sized conifers, commonly reaching 40 to 80 feet in height. However, some of the tallest specimens (located in the western United States) reach 180 feet in height. Although they are generally considered climax species, hemlocks rapidly colonize disturbed areas, thanks to their ability to grow very quickly when provided with abundant sunlight. In most places where they occur, hemlocks eventually dominate the habitat.

In the early 1950s, a small insect native to Japan was found feeding on hemlocks in Virginia. The insect– known as the hemlock wooly adelgid (Adelges tsugae) — is a member of the order Hemiptera (the “true bugs”). Like other true bugs, these adelgids have piercing-sucking mouthparts, which they use to feed on the sap of the hemlock trees.

Inflected trees usually fade from the deep emerald green color characteristic of healthy specimens, to a pale, grey-green color. Most affected eastern hemlocks eventually die from the infestation. According to some estimates, half of the population of eastern hemlocks has been affected by the invasive adelgid. In their native Japan, the insects do not often cause serious problems, because their population is kept in check by a predatory beetle, Sasajiscymnus tsugae. This beetle is currently being used in the eastern United States to help combat the adelgid.

Ecologists fear that the loss of hemlocks will lead to problems in other species, as the trees play several crucial roles in their native habitats. For example, hemlocks often grow alongside streams, where their foliage helps to shade the water, thereby keeping the water temperatures low enough for native trout species. While a native species of hemlock wooly adelgid lives in the Pacific Northwest, western hemlocks rarely die from attacks by these insects.

Hemlock wood is moderately strong, and it has become more commonly harvested for timber purposes over the last several decades. Hemlocks make very attractive and hardy landscape trees, but it is important to avoid planting them in drought-stricken regions unless you can provide supplemental irrigation – hemlocks are much less drought tolerant than most other conifers.

Because they are very tolerant of shade, they often thrive in areas where few other conifers will. Several cultivars of the eastern hemlock are available commercially, giving landscapers even more options for incorporating these beautiful trees.