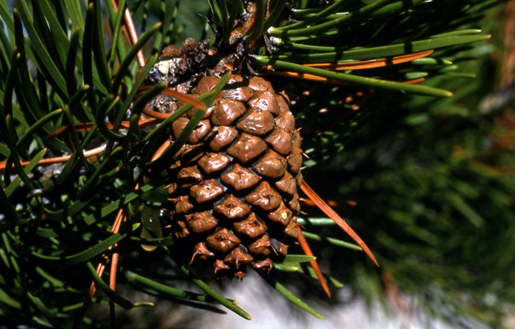 The heat-sensitive cones of a lodgepole pine tree. Photo from the National Park Service.

Over the millennia, plants and trees native to fire-prone regions have evolved a number of adaptations that allow them to persist in these challenging habitats. Some plants have subterranean rhizomes that rapidly regenerate the aboveground portion of the plant after it burns in a fire. Others produce seeds that lie dormant until exposed to fire, smoke or some other stimuli.

These measures help ensure that even if all of the mature plants succumb to the fire, the buried seeds or rhizomes germinate or sprout to perpetuate the species, once the fire passes.

Trees often utilize slightly different adaptations. Unlike small perennials and annuals, some trees are capable of surviving low-intensity fires. They often accomplish such feats through the development of thick bark, which protects the tree’s delicate cambium layer. (National Park Service, 2014) If the cambium survives, the tree will recover in most cases.

An adaptation that helps some pines from fire-prone areas, such as ponderosa pines (Pinus ponderosa), to survive fires, relates to their ability to jettison their limbs. Ponderosa pines are a self-masting species, which means that they drop their lower limbs as they grow taller. This helps to reduce the amount of tinder and kindling between the ground and the canopy, and therefore reduce the amount and severity of fire damage in the canopy.

This allows many mature trees to survive low-intensity fires; but what about their seeds? The seeds of many trees are incapable of surviving in the soil until the next fire passes through; so, many trees have evolved alternative methods for ensuring the perpetuation of the species.

One such method is a phenomenon known as serotiny, in which the heat of a wildfire causes their fruiting structures (cones in the case of pines) to release seeds. They accomplish this with resins and saps; these substances cover and contain the seeds, but when the fire passes through the area, it melts the sap, releasing the seeds.

Some species exhibit variable resin production. For example, lodgepole pines (Pinus contorta) are very tall, thin conifers, native to the western United States (including northern California). Way back in 1985, Patricia S. Muir and James E. Lotan studied a population of lodgepoles in Montana. Publishing their results in the journal “Ecology,” the researchers found that serotiny varied among populations of the trees. Some lodgepole pines produce thick resin, while others fail to produce any, and release their seeds upon maturity. (Lotan, 1985)

This variation sets up an interesting dichotomy: Areas dominated by serotinous trees quickly recover after fires, as the mature lodgepoles release a great number of seeds en masse.  These seeds strike the relatively bare soil, have few competitors and quickly grow to replace those lost to the fire. Such stands perpetuate over long periods of time.

Without temperatures high enough to melt the cone resin, the cones never release their seeds. While cones less than one foot from the bare, sunny ground sometimes warm enough to melt the resin and release the seeds, this does not happen very often. This helps to explain why some serotinous lodgepole pines persist in areas without fires. Likewise, because a few trees (and more importantly, seeds) survive almost every fire, a handful of non-serotinous lodgepoles pop up in many fire-ridden areas.

Nevertheless, the numbers look as the hypothesis (resin helps provide the trees with a competitive advantage in fire-prone areas) predicts they should. Muir and Lotan found that most areas featured a 75: 25 split. Accordingly, over thousands of years, those areas prone to periodic fire exert a selective pressure that favors serotinous trees, while those areas that do not experience periodic fires produce pressures that favor non-serotinous trees. (Lotan, 1985)

Trees, Jobs and the Economy