You are here: Home1 / Geography 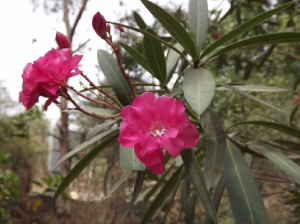 Named after their superficial resemblance to olive trees, Oleander (Nerium oleander) is an attractive shrub or small tree that thrives in a Mediterranean climate. Originally hailing from North Africa and West Asia, property owners can now purchase oleanders in any of more than 400 different forms.

Oleanders most commonly grow as large, bushy shrubs, but some specimens develop a tree-like size and shape. Most oleanders are only a few feet tall, but the largest examples may reach 20 feet in height. When large, oleanders tend to exhibit an umbrella-like growth habit. Their stems grow in a relatively narrow clump, but the tops of the branches spread out and cascade toward the ground.

Oleander leaves are dark green and arranged in pairs (although they occasionally feature a whorled leaf arrangement). An evergreen plant, oleander remains quite attractive throughout the year.

Nevertheless, people do not typically fall in love with oleanders because of their dark green leaves – the flowers are the oleanders’ claim to fame. Sweet-scented and abundant, oleander flowers are as beautiful as they are plentiful; they often bloom throughout the entirety of the warm season. Most oleanders have white or pink flowers, but some cultivars yield flowers ranging from yellow to red.

Unlike many other flowers that depend on the help of insects for pollination, oleanders do not appear to provide any benefit to the insects that visit them. Instead, they appear to use deceptive practices to trick bees into visiting the flowers, even though they produce no nectar on which the bees can feed.

The downy seeds are released from long, thin pods; they take to the air and drift far away when strong winds blow.

While they do not appear to be toxic to many rodents or birds, oleanders are toxic to humans and some other animals. The toxins produced by the plant may cause gastrointestinal upset, heart rhythm problems and even nervous system disturbances – in some cases consumption has resulted in death. However, many tales of oleander poisoning are little more than myths. While you should certainly avoid consuming any part of the plant (all tissues potentially bear the toxic components), human deaths from consuming the plant are relatively rare.

Some people report that contact with the sap of oleanders can cause a skin rash, so caution is advised when contacting the plants. Many insects that feed upon the leaves sequester the ingested toxins and use them as a defense mechanism. Because they are toxic, oleander trees and shrubs typically receive little damage from deer and rabbits.

Oleanders grow best in USDA Hardiness zones 8 through 10, but many people have successfully grown them outside of this range. Tough plants, oleanders can handle a wide array of challenges, including high temperatures, periodic drought, periodic flooding, compacted soils, salt spray and high pH levels. However, they are very sensitive to temperatures below about 20 degrees Fahrenheit. When exposed to such chilly temperatures, they almost always suffer damage.

However, if protected from low temperatures, oleanders can thrive just about anywhere. Many people grow them as indoor, potted plants and move them outside during the summer. Alternatively, they can be grown inside the climate-controlled confines of a greenhouse.

Trees of the genus Cycas are primitive gymnosperms that superficially resemble palm trees. However, they are quite distinct from true palms, and form an entirely different lineage.

Cycas trees – like most other members of the class Cycadopsida – feature a ring of pinnately compound (feather-like) leaves attached to the top of the trunk. You can further recognize members of the genus by noting the prominent mid-ribs of the leaflets and lack of any obvious secondary veins.

Like all other cycads, trees of the genus Cycas are dioecious, with distinct male and female plants. In both cases, the cones lie at the top of the trunk and emerge from the center of the leaf ring.

While some members of the genus feature round, subterranean trunks and are essentially shrub-like, others have tapering, tree-like trunks that grow aboveground. Most cycads feature relatively shallow root systems and grow very slowly. The majority of species remain rather small, with the largest specimens reaching perhaps 35 to 40 feet in height.

Between 90 and 115 species comprise the genus Cycas (the only genus in the family Cycadaceae), making it one of the largest lineages in the class Cycadopsida. Commonly known as the cycads, the ancestor of this group of species is thought to be the sister lineage to the other families in the class.

Cycads are ancient species that were found across most of the world by the beginning of the Triassic period. In fact, the entire Mesozoic era (which spanned from approximately 225 million years ago to 65 million years ago), is often called the “Age of the Cycads,” because of the plants’ dominance in these ecosystems. According to the University of California, Museum of Paleontology, cycads represented one-fifth of the world’s flora during much of the Triassic and Jurassic periods.

Cycas trees are confined to the Old World. They are found from Japan, west to Africa and Madagascar, and south as far as northern Australia. As a group, the trees inhabit a variety of landscapes; some forms grow in tropical rainforests, while others grow along rocky escarpments.

Some species, for example, Cycas circinalis are well adapted to living along shorelines. The seeds of these trees are buoyant and capable of lasting extended periods of time floating through the ocean, until they eventually wash up in a habitable location.

One of the most commonly cultivated species is the so-called sago palm (Cycas revoluta). It prefers full sun, but some people succeed in growing them indoors. Because they remain relatively small, they are often planted in restricted spaces. If provided with a suitably large vessel, sago palms often thrive when grown in a container.

Several indigenous cultures throughout the range of these plants collect and eat the trees’ seeds as a food source, and some harvest starch – called sago — from the stems. However, neurotoxins are found throughout many different portions of the plants; if consumed, the poisons can cause serious disease or death. Accordingly, most people who eat the seeds or sago attempt to leach out the toxins with copious amounts of water.

Larches are medium to large trees of the genus Larix. Scientists debate the finer points of the group’s interrelationships and classification, but most recognize about 10 to 15 species.

Most larches live in North America, Europe and Asia, although they have been planted in many other locations as ornamental species. Often, these trees are referred to as tamaracks in North America.

Eastern larches (Larix laricina) thrive in moist, acidic soils, while Japanese (Larix kaempferi) and European larches (Larix decidua) thrive in slightly drier soils. Most specimens are best adapted to live at high elevations, and some commonly live at heights of over 7,000 feet.

In many ways, larches are unusual conifers – especially as it relates to their needles. Unlike the spiky or hard leaves of most conifers, larch leaves are soft to the touch. Larches are also deciduous trees that shed their needles each autumn. Like the needles of some other deciduous conifers, such as bald cypresses (Taxodium distichum), larch needles change color before falling off the tree. However, unlike bald cypress needles, which turn reddish-brown before dropping, larch needles turn brilliant yellow in the early autumn.

Additionally, larches produce and bear needles differently than most other conifers. The needles on the current year’s wood emerge singly, whereas those on older wood occur in dense clusters. Stout woody pegs (spur branches) sit at the base of these needle clusters. Larches produce relatively small woody cones, which average about 1 to 2 inches in length.

Larches shed their lower branches as they grow. Mature specimens often feature branchless boles for half or more of their length. Combined with their propensity for producing relatively sparse foliage, their self-pruning nature means that a relatively high level of light penetrates their canopies. This leads to a proliferation of herbaceous and shrubby growth beneath them. The bark of larches is characteristically thin and flaky.

Larches are not especially important food sources for wildlife, although upland game birds and songbirds consume their seeds opportunistically. Birds also make nests in their bushy boughs. Mammals rarely rely on larches for food, but rodents, beavers and other animals occasionally nibble the bark, twigs and buds of the trees.

Most larches need full sun exposure to survive (which is part of the reason they shed their lower, shaded branches). They are very susceptible to competition from other plants, and cannot survive under shaded canopies. Even grasses or other plants growing under their canopies can stress them. Accordingly, larches are early successional species, quickly invading old fields and lakes that have been filled in by silt over the years. Larches often grow as pure stands, but black spruces (Picea mariana) are their primary associate in mixed forests.

Larches typically fare poorly in warm climates, so their use as an ornamental species is primarily limited to northern latitudes. Despite the fact that they often inhabit marshy sites, larches cannot tolerate submerged roots and their shallow rooting habit makes them susceptible to windthrow. While larches often colonize areas following wildfires, their bark provides relatively poor protection from fire.

Larch wood is heavy, strong and relatively resistant to both water and decay. This has led to its use in a variety of applications. One particularly noteworthy use for larch wood is in the production of yachts. However, larches are not very important commercial trees, and most of the harvested trees are converted into pulp.