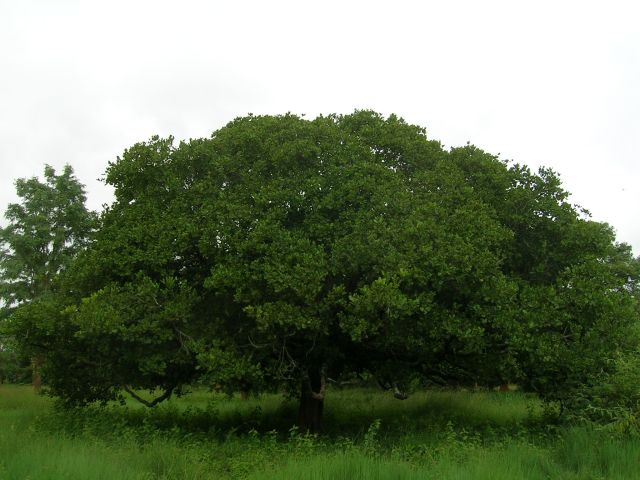 Most famous for the delicious nuts they produce, cashew trees (Anacardium occidentale) are medium-sized evergreen trees, historically native to Brazil.

Aside from their well-known and commercially important tree nuts, cashew trees also produce an edible accessory fruit, commonly known as a cashew apple.

In a culinary sense, cashews work in the same contexts as most true nuts do, so they are often referred to as such. However, in the botanical sense, cashews are seeds, not nuts.

Traits of the Tree

Cashew trees are medium-sized, evergreen trees that reach heights of about 20 to 40 feet. Their foliage is quite dense and attractive, and typically forms a spreading crown.

The leaves are smooth, leathery and rounded at the distal end, with prominent veins. Cashew trees produce a well-developed network of roots, which help them to survive during times of minimal rainfall. When grown in areas with deep, loamy soil, cashew trees produce a large taproot, which helps them access deep-water reserves. This dense network of roots makes transplantation somewhat problematic.

Cashew trees produce relatively small, pink- to magenta-colored flowers, which emerge from the current season’s growth. The flowers may be male, bisexual or female, although female flowers are relatively rare on the trees.

Although it seems surprising, cashews are not-too-distant cousins of poison ivy (Toxicodendron radicans) and poison oak (Toxicodendron diversilobum). Accordingly, some parts of cashew trees contain urushiol – the problematic compound found in the sap of these and other, related plants.

One part of the tree that holds a significant quantity of the toxic compound is the seed’s outer shell. This makes shelling the nuts difficult, and most commercial operations rely on special equipment to shell and clean the nuts. In fact, the University of Florida discourages private individuals from trying to harvest home-grown cashew nuts, as the caustic fluid can cause severe blistering if it contacts the skin.

Although native to northeastern Brazil, cashew nuts are now grown in several countries around the world. Vietnam produces more cashews than any other country, but India, Nigeria, Cote d’Ivoire and Benin also produce significant amounts of the nuts.

In spite of the problems associated with harvesting the seeds, many people like growing cashew trees as attractive ornamentals (although you can harvest the cashew apples produced by the trees, which, due to their short shelf life are typically not available in American markets). Cashew trees are most commonly grown in this fashion in south Florida, but they may thrive in southern California if nurtured.

The commercial harvest of cashews requires a long-term commitment, as it typically requires eight years for the plants to produce an economically significant harvest. However, dwarf varieties have been developed recently, which become economically viable at the end of their third year. Additionally, these dwarf varieties produce more than three times as many seeds per acre as wild-type cashew trees do.