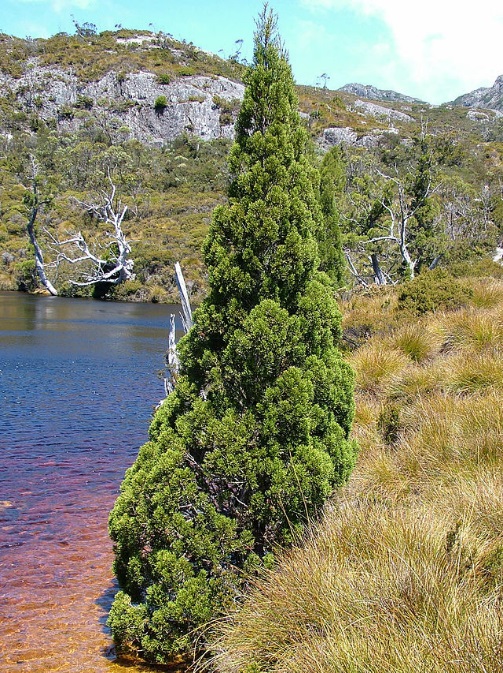 Tasmanian cedars are attractive conifers, native to the temperate rainforests of west Tasmania. Even though these trees originate on the opposite side of the planet and inhabit very different ecosystems, they resemble a few North American natives.

Although Athrotaxis species often bear common names including terms like “pine” or “cedar,” they are neither; instead, Athrotaxis are in the cypress family (Cupressaaceae). Accordingly, Tasmanian cedars are closely aligned with other members of the cypress family, such as Atlantic white cedars (Chamaecyparis thyoides), bald cypresses (Taxodium distichum) and arborvitaes (Thuja occidentalis).

Taxonomists disagree on the number of species present within the genus; some evidence suggests the genus contains two species and a hybrid of the two, while other evidence is consistent with the existence of three distinct species.

Besides growth form and habitat preference, the three species are very similar in general biology. They all exhibit roughly similar life cycles and reproductive strategies. All Tasmanian cedars are monoecious trees, meaning that individual trees bear both male and female cones. About six months after pollination, the quarter-inch-long cones open and release scads of tiny seeds.

Pencil pines are medium-sized trees, averaging about 20 to 30 feet in height. However, occasional specimens exceed these heights, climbing up to 60 feet above the ground. Pencil pines have scaly leaves, which lie against the tree’s branches. Pencil pines often occur at the top of the timberline, at higher elevations than Eucalyptus trees grow. This helps to explain why pencil pines are the most cold tolerant of the Tasmanian cedars; but curiously, all three forms exhibit similar drought- and flood-tolerance, despite preferring different elevations.

King Billy pines are the largest of the three forms, occasionally reaching heights of 90 feet. The leaves are much different from those of the pencil pines; they are elongate, pointed and claw-like. Formerly an important timber species, the wood of King Billy pines is soft, lightweight and rot resistant. Unfortunately, the useful wood is unsuitable for commercial harvest, given its slow growth rate and bush-fire-induced decline.

None of the three species is common outside its native range, although all three thrive in many botanical gardens of northwestern Europe, where the mild climate and ample rain suit the trees well. Athrotaxis prefer cool summers, mild winters and abundant rainfall, and they are rated for USDA Hardiness Zones 7b – 10b. While not commonly grown in the United States or seen in nurseries, Tasmanian cedars may thrive in cool Californian microclimates. Seeds are occasionally available from commercial sources; summit cedars are more commonly seen than the other two species.

All three species of Athrotaxis live long lives. Several living pencil pines are more than 1,000 years old, and scientists know of at least on living specimen — a King Billy pine – that is nearly 800 years old. All species are relatively slow growing; for example, a King Billy pine planted at the Osborne House – a seaside palace on the Isle of Wight – is over 100 years old, yet has only grown to a height of 25 feet.