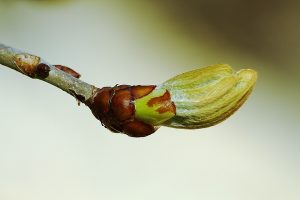 From a macro view, trees appear to grow in many different ways through the course of a season. Their leaves unfurl and enlarge in the spring and their fruit swell in the summer.

But this is not true growth – after all, the tree will shed these structures eventually.

True growth occurs when trees produce new wood. This kind of growth produces tissue that persists from one season to the next.

But even this growth is a very location-specific phenomenon, and it only occurs in a few places throughout the tree.

These places are called meristems.

However, apical meristems also produce the cells that will become the plant’s secondary growth center – the lateral meristems.

Lateral meristems are found in the thin ring of tissue around the circumference of a tree’s trunk, branches and roots. These lateral meristem regions (which exist along the entire length of the branch or root in question) are responsible for increases in girth, rather than length.

Lateral meristems occur in two different tissues of each branch. The innermost ring is called the vascular cambium, while the outer meristem layer is called the cork cambium. Each produces new tissues from both the inner and outer surface of the ring.

More specifically, the cork cambium produces cork cells on its outer surface and phelloderm cells on its inner surface. The cork cells will eventually die and become the outer bark, while the phellogen is a parenchyma-rich layer of cells that serves to store starch for future use.

Further inside the tree, the vascular cambium produces phloem tissue on its outer surface and xylem cells (wood) on the inner surface. Phloem tissue transports starches along the length of the branches, while xylem transports water from the roots to the leaves and supplies support and stability to the tree as a whole.

The Arboricultural Implications of Meristems

With the understanding that trees only grow from these regions, it is important to apply this knowledge to the ways in which we prune trees. There are a number of ways to use this knowledge, but the following include some of the most important:

Vacationing Couple Sues After Branch Falls on Them