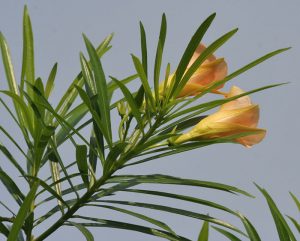 Hailing from Mexico and Central America, the yellow oleander (Thevetia peruviana) is a large shrub or small tree adorned with beautiful yellow to peach flowers, that are very popular among gardeners and homeowners.

The classification and composition of the genus Thevetia is cloaked in controversy. Some authorities consider the genus to be a part of the genus Cascabela, while others maintain that, while the two groups are closely related, they remain distinct. In either case, there are between three and eight species recognized, with the yellow oleander (Thevetiaperuviana syn. Cascabelathevetia) being the most commonly encountered form.

All parts of the yellow oleander are poisonous – even the milky sap. Ingestion typically leads to cardiac symptoms and electrolyte imbalances, which may be fatal without medical attention. Humans aren’t the only species susceptible to the poisons, as dogs, cats and horses may also suffer ill effects after eating the plant. Nevertheless, a few birds– including Indian gray hornbills (Ocyceros birostris) and several bulbul species (Pycnonotus spp.) — feed upon the plant’s fruit without apparent problem.

The plant’s toxins were so widely respected among Central Americans that the tree was often called the cascabel (a Spanish word often applied to rattlesnakes), which is a reference to its ability to kill as readily as a rattlesnake can.

Yellow oleanders are heat-loving trees who prefer warm temperatures and ample sunlight. Plant them in exposed, sunny locations whenever possible, but they will usually survive in areas of partial shade.They are best suited for U.S.D.A. Hardiness Zones 9 and 10, although they are also grown in Zone 8, although precautions must be taken to protect the plants from unusually cold temperatures.

Despite their tropical native range, yellow oleanders grow well in Mediterranean climates – such as those found along much of California’s coastline. While their growing location must be well-drained, they typically adapt well to most soils. While they are generally considered a reasonably drought-tolerant species, your plants will appreciate supplemental water during dry spells.

In general, yellow oleanders are low-maintenance plants, that cause their caretakers little trouble. They are often pruned while small to encourage them to develop a tree-like growth habit, but thereafter, the pruning needs of these small trees are relatively minor. The tallest specimens may reach 20 feet, but most will remain under 10 feet tall. They do produce hard, black to red seed capsules, which present an annual litter problem, but they are otherwise unimposing.

Thanks to its popularity, yellow oleander is cultivated and grown in suitable climates around the world, including India, Sri Lanka and other portions of South Asia. In many of these places, the plants have escaped cultivation and spread throughout natural habitats, where it has become an invasive species. Although the plant has some wildlife value, it also outcompetes a number of native species, to the detriment of the habitat and greater ecosystem.

Some of the locations in which yellow oleander has become naturalized include Australia, Tanzania, Uganda and portions of East Africa. It has also established itself on many Pacific Islands and some parts of the U.S. One important side effect of this species’ range expansion is the danger it represents to domestic or agricultural animals who may feed upon the plant’s flowers or seeds.