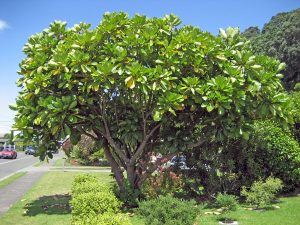 Native to islands in the South Pacific, most species of the genus Meryta are small, evergreen, dioecious trees. The genus contains 28 different species, but scientists routinely add, synonymize and eliminate the occasional species within the group.

Meryta trees are found on several different islands in the south Pacific, but they are best represented in New Caledonia, where 11 endemic species live. Many native cultures existing alongside Meryta trees consider them to be sacred, and protect particularly noteworthy specimens with fences or other boundaries. Among other uses, the Maori use the bark of some Meryta species to produce a dark, red dye.

Meryta trees are excellent choices for many Californian properties. They’re distinctive foliage and modest size makes them both attractive and manageable in most yards, and their tolerance of salt spray means they even work well right on the coast. Further, Meryta trees do not produce thorns or prickles, require little in the way of regular maintenance and do not cause significant litter problems.

Rated for USDA Hardiness Zones 10 and 11, Meryta trees prefer full- to partial-sun exposure and well-drained, loamy soil. Although they aren’t exactly drought tolerant, they do not require as much water as is commonly supposed. Most Merytas bloom in the winter, although their flowers are relatively inconspicuous, those of some species produce a pleasant fragrance.

Important Species in the Genus Meryta

Although represented by 28 different species, only three are available on any kind of regular basis.

Native to Norfolk Island, Australia, the broad-leaved Meryta is an evergreen tree that reaches heights of between 15 and 20 feet. In keeping with the theme of the genus, the leaves of broad-leaved Merytas are quite large, measuring as much as 2 feet in length and 1 foot in width.

Denham’s Meryta is a New Caledonian endemic, that grows to about 20 feet in height. Although noteworthy for their enormous leaves, which may reach 3 feet in length or more on mature specimens, Denham’s Merytas also bear fragrant flowers. This is somewhat unusual for (apparently) wind-pollinated species, but a pleasant treat for homeowners planting the trees on their property.

Denham’s Merytas are cultivated in parts of Australia and Florida, but given their intolerance to freezing temperatures, they are not cultivated as commonly as pukas (who are slightly more cold tolerant than Denham’s Merytas) are.

Like most members of the genus Meryta, the puka bears very large, thick leaves; however, the puka is noteworthy for having the largest non-divided leaves of any New Zealand tree species. Although the puka grows as a single trunk when young, it typically begins to branch out after producing its first inflorescence. It is often the dominant tree species within its native range.

The puka has been cultivated since at least the end of the 19th century, and it remains a widely propagated tree in the modern world. Because of its tolerance to wind and ability to grow in either sun or partial shade, the puka is a common street tree in its New Zealand homeland; and it is being seen with increasing regularity in warm locations worldwide, such as California and Florida. However, as the puka is susceptible to freezing temperatures (as are most Meryta species), it is not suitable for locations in which the temperatures drop below about 28 degrees Fahrenheit.