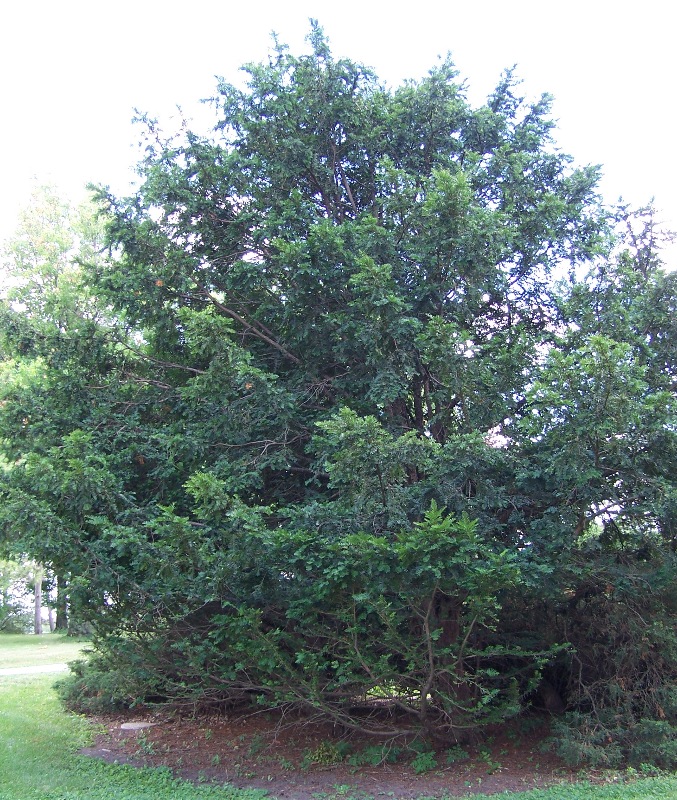 Native to most of Europe and Asia, as well as northern Africa and North America, yew trees (Taxus spp.) are ancient species that have been associated with human culture for millennia.

Yew wood has been considered one of the finest materials for constructing longbows for centuries, but it has also been used to make spears and other tools throughout the ages.

Because they were thought to be a symbol of resurrection and immortality, yews were planted over graves by the ancient Celts. In the modern world, yews are primarily used as ornamental or shade trees, although they also provide the world with important medications.

Yews are evergreen conifers whose flat, needle-like leaves twist around the stems to produce two flattened splays. Although most forms in the genus are very slow growing, some eventually reach heights of 120 feet or more.

Yews live relatively long lives; while 500 years is probably typical, a few living specimens have reached their 1,000th birthday. Nevertheless, the world’s oldest known specimen is much older than this – a tree growing in Perthshire, Scotland has reached approximately 5,000 years of age.

Many birds and small mammals feed on yew cones, thereby serving as important agents of seed dispersal for the trees.

The taxonomy of the living yews is not well resolved; although it is clear, they are all very closely related to each other.  Some authorities recognize about nine distinct species, while others consider the entire clan to be a single species, with many subspecies or geographic variants.

Yews are noteworthy for their production of poisonous alkaloids, known as taxanes. Animals are occasionally found dead after having ingested yew tree leaves, twigs or seeds. Almost every part of a yew tree is toxic, including the bark, needles and seeds. The fruits, however, are edible and non-toxic.

Nevertheless, yew trees also produce very beneficial botanicals. The cancer drug paclitaxel was originally derived from the bark of yews, which led to the species’ precipitous decline in recent history. However, the drug is now primarily made via synthetic means, which has reduced the pressure on the trees.

The pollen of male yews is a potent allergen that causes acute symptoms in many people that come into contact with the trees. Interestingly, females do not produce allergenic pollen; whereas males earn a 10 out of 10 rating on the OPALS allergy scale, females are only rated as a 1. In fact, female trees collect some of the pollen produced by the males, thereby improving the air quality.