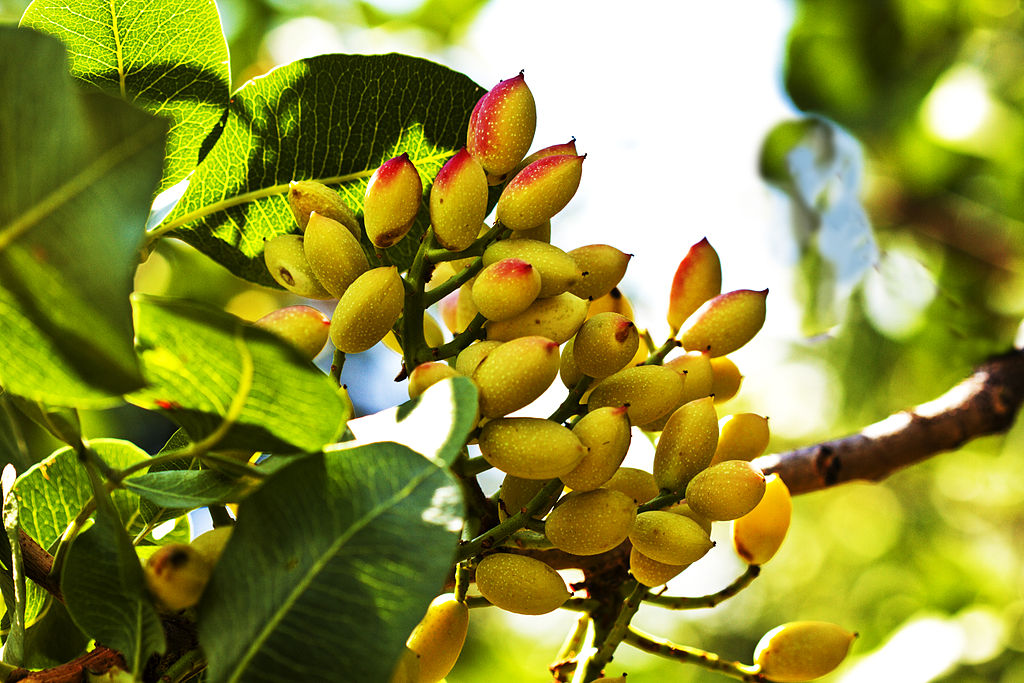 About 16 trees native to parts of Europe, Africa, Asia and the Americas comprise the genus Pistacia.  They vary widely in growth habit – some are small and shrub-like, while others mature into 50-foot-tall trees.

This commercially important genus includes not only the common pistachio (Pistacia vera) tree, from which the delicious nuts are harvested, but also the odiferous terebinth tree (Pistacia terebinthus), from which turpentine is harvested.

Trees of the genus Pistacia produce pinnately compound (feather-like) leaves, with each featuring three to five broad leaflets. These trees produce very deeply penetrating root systems, which help them to access water during times of drought. Their trunks are covered in smooth, brown to gray bark, which are generally kept covered for the first few years following transplantation, to prevent them from being scalded by intense sunlight.

Most Pistacia trees produce flowers of only one sex – botanists would say that they are dioecious. This means that orchards must grow both male and female varieties in close proximity to ensure fertilization and eventual fruit set. Pistachios are technically a type of drupe, but unlike stone fruits, the edible portion of a pistachio fruit is the seed kernel. Unlike commercial pistachio cultivars, which produced hard-shelled fruit, the shells of wild-type Pistacia trees are soft.

Many pistachio trees are adapted to the moderately rainy winters and warm, dry summers that characterize Mediterranean climates. Accordingly, they grow quite well in southern California and are popular landscaping plants. Pistachios are sun-loving trees that, despite having relatively high water requirements, need very well drained soil if they are to thrive. If their soil is allowed to become too damp (particularly in the winter), they often develop root rot.

The Chinese pistache (Pistacia chinensis) is the species most commonly used for ornamental purposes, thanks in part to its fantastic fall coloration and hardy nature. However, common pistachios are also planted ornamentally.

Many people also grow pistachio trees in order to produce their own nuts. In many ways, pistachios are well suited for this type of small-scale production, as they are wind pollinated (and therefore do not require the services of honeybees) and resistant to most common pests. However, pistachio trees mature rather slowly and often require five or more growing seasons before they produce seeds.

Worldwide, commercial pistachio growers produce about 900,000 metric tons of nuts annually. Two countries – the United States and Iran – are responsible for approximately three-quarters of the total harvest. Other important pistachio-producing countries include Turkey, China and Syria.

Common pistachios are not the only species that is an important food source. In some parts of Europe, the seeds of terebinth trees are used to make special flour. Other cultures consume the shoots of the plant or use the seeds to flavor alcoholic drinks.

Pistacia trees are members of the sumac family (Anacardiaceae), along with eastern poison ivy (Toxicodendron radicans) and mango trees (Mangifera spp.). As with many of these relatives, some parts of Pistacia plants contain the potent toxin urushiol. Urushiol causes intense itching and rashes in sensitive persons, but this rash usually takes several days following exposure to manifest.

Accordingly, caution is warranted when working around the trees. Be especially careful of handling freshly cut stems, and avoid burning the wood of Pistacia trees, as this may release urushiol into the air, where it may be inhaled into the lungs. This type of exposure can represent a life-threatening situation.