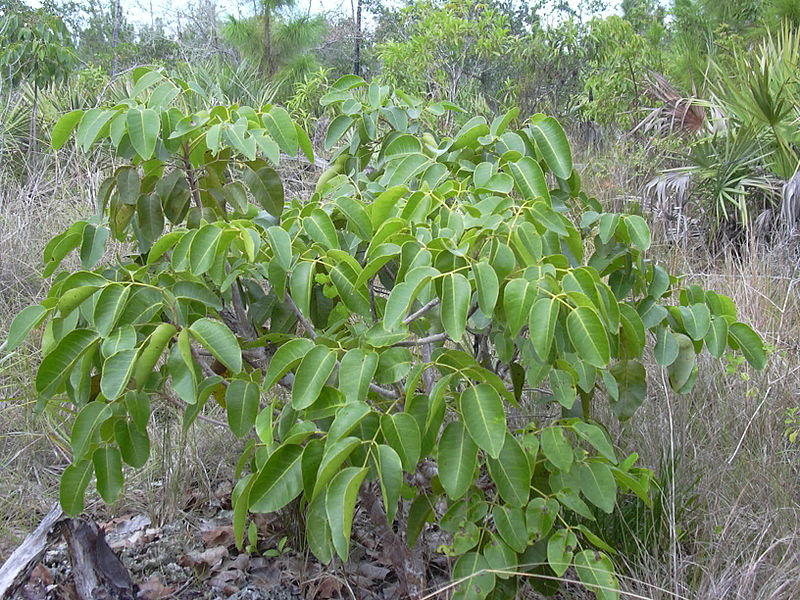 Poisonwood trees commonly reach about 20 to 40 feet in height, but some remain smaller and shrub-like. Most poisonwood tree trunks are short and bear several stout branches. The trunks vary from reddish-brown to gray, with numerous dark spots, produced by the tree’s copious amounts of thick sap.

The alternately arranged, evergreen leaves are pinnately compound (feather-like), and each bears three to seven leaflets. The trees’ evergreen nature contrasts sharply with that of its more temperate relatives, who lose their leaves each winter.

Members of the sumac family (Anacardiaceae), poisonwoods are close relatives of eastern poison ivy (Toxicodendron radicans), Pacific poison oak (Toxicodendron diversilobum) and poison sumac (Toxicodendronvernix). Like these notorious cousins, poisonwoods produce urushiol, the toxic component that causes an allergic reaction in many people. Accordingly, caution is warranted whenever working near these plants, and those living with the natural range of the plant are wise to learn to identify the species visually.

Urushiol is a highly potent irritant that can cause serious injuries. The substance is found in most parts of poisonwood trees, including the leaves, bark and inner wood. Despite containing this potent toxin, several native Central American cultures use the sap of poisonwood trees medicinally.

Given its wide distribution (including parts of the United States), Florida poisonwood is the best known member of the genus. Black and Cuban poisonwoods are relatively poorly known species, with restricted geographic distributions. Cuban poisonwoods, for example, are only found on the island of Cuba.

While the black poisonwood is an important lumber species in many parts of Central America, neither of the other two species in the genus are commercially important. Black poisonwood is regarded as easy to work, hard, heavy and durable. It often features rich dark red colors and handsome figuring. It is primarily used to make interior goods, such as cabinets, furniture, and flooring; but it is also used in a variety of external applications, such as vehicle parts and bridge construction.

Most species in the genus Metopium inhabit areas with very well-drained soil, such as pinelands, hardwood hammocks and sandy coastal dunes. Because they are typically tolerant of wildfires, which are common to many of the habitats in which they grow, poisonwoods often form pure stands, devoid of other species. Additionally, studies have found that these plants produce a variety of allelopathic chemicals, which inhibit the growth of nearby competitors.

Like their relatives, poisonwood trees rely on animals to disperse their seeds, which are tucked inside yellow drupes (berries). Many birds relish poisonwood tree fruits, including the endangered white-crowned pigeon, for whom it represents a vital resource. These birds spend their nights roosting in coastal mangrove forests, while their days are spent searching for poisonwood trees that grow farther inland.